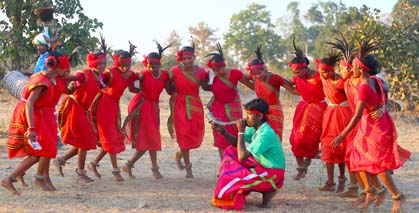 Main Exponents of Music in Telangana

Bhakta Ramadasu or Bhadrachala Ramadasu (also known as Kancherla Gopanna) was a devotee of Lord Rama in the 17th century and is considered to be an eminent composer of Carnatic music. He was also a vaggeyakara (composer, lyricist and singer of his own lyrics). Other major music composers include Tyagaraja and Kshetrayya.

Popular composer Anamacharya is believed to have written hundreds of folk songs in Telugu in the 14th century.

Tribes such as Dasari, Jangama, Chenchu, Baind and Kuruva have aided to propagate these folk songs as they keep moving from one place to place being gypsies.

Music composers like Pendyala Nageswara Rao, duo of R.Sudarshanam and R.Goverdhanam have contributed to films based on folklore and other mythological films.

Telugu cinema is popular as 'Tollywood' and is centred in Hyderabad. You must visit Ramoji Film City whenever you visit Hyderabad. The Prasads IMAX in Hyderabad is one of the largest 3D IMAX screen in the world! If you consider the number of films produced annually, Telugu film industry is rated second in India. 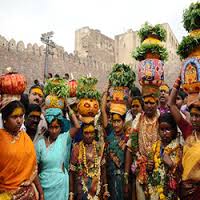 Then, there are songs which are meant to be sung during religious Jatras or processions. Jatras include Sammakka- Sarakka jatara at Eturnaagaaram (Warangal district), Mahankali jataras (during Ashadham in Hyderabad district). Here is one such song -

Music, rhythm and lyrics are given prime importance in folk songs. Villagers sing while working in the field and gain vigour. Some songs are devotional or philosophical too. The folk songs are a mirror to traditions and culture of Telangana. Mothers sing lullaby for their children to put them to sleep. One such song is --- Jo Atchutananda jojo mukunda-raara paramaananda Rama Govinda.

Folk songs are also sung when villagers desire to pray to their Gods for rains and while ploughing the fields and sowing seeds in order to reap a good harvest. For instance, this folk song is sung while sowing seeds in the field in Telangana -

Folk music is said to have had an impact on the State hood movement too as it helped people to come together during various cultural events and discussions. Let us learn more about some forms of Folk music in Telangana -

A few communities (such as Yadav and Kuruma Golla communities) in Telangana sing songs just like ballads. These may be in praise of Lord Shiva (also known as Mallikarjuna) or their own tribal Gods whom they worship. Oggukatha is a narration and dramatization of various stories of Gods such as Mallana, Beerappa and Yellamma. Traditional priests among Yadavs who perform marriage of Mallanna with Bhramaramba are known as 'Oggus'. Oggukatha comprises of a narrator and his chorus who aid in dramatization of lyrics. Oggukatha folk singer groups visit Komrelly Mallanna temple every year.

The story is narrated in the form of a song/ballad. The stringed instrument folk veena (also called sarada) is used in Sarada Kala. 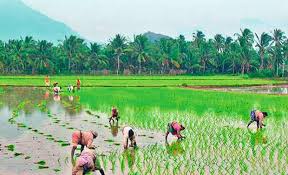 These are actually labour songs sung by various categories of workers - those working in the agricultural field, cart-pullers, industrial workers, stone crushers, construction workers etc. Work becomes a pleasure by singing folk songs and relaxes the tired mind and body.

In the fields, men and women are divided into two groups. They sing these melodious folk songs in a group. Here is an example of a folk song sung by labourers working in the agricultural field and invoking the rain God ---

There are some songs which denounce wrong social customs prevalent in the society. One such song composed by Annamayya is 'Tandanana ahi tandanana' where he has condemned social evils like caste and discrimination on the basis of colour. The lyrics are so simple that they can be easily understood even by illiterate people and serve to enlighten and educate the masses. 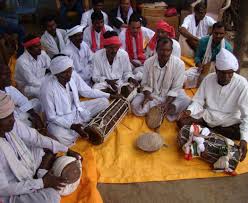 Tribes residing in Telangana have their own different festivals and tribal songs. These songs help them all to bond together during happiness (marriage and festivals) or in sorrow (death of any member). These singing sessions are a way of entertainment and relaxation too.

The introductory part of a folk song is known as 'pallavi' and 'charanams' are the continuation of the song content. Charanams may be contrasting in nature. For instance, while singing, men and women form into two separate groups singing in the form of question and answers. One group sends the question while the other group sings to answer the question! This becomes really enjoyable and entertaining. 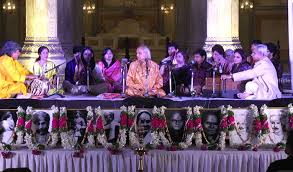 This annual music festival is held at chowmahalla Palace in Hyderabad. The festival is organized by Pandit jasraj in honour of his guru and father and elder brother --- both gifted musicians. It is organized on 30th November every year.

Kalasagaram Annual Cultural Festival of music, dance and drama is held annually at Keyes High School in Secunderabad. It aims at introducing young, talented musicians and was started in the year 1967.

The Deccan festival is another annual festival organized from 25th February to 1st March. The venue is Qutub Shahi tombs in Hyderabad. The highlight of the festival is ghazals, qawalis, mushiaras (poetry session) etc. along with food stalls catering to exotic and mouth watering Hyderabadi dishes! This festival is organized by Tourism Department Corporation.

SOVA Music Festival and Astra Music festival (for lovers of electronic dance and music, rocking beats!) are some more festivals organized in Hyderabad.

Folk music in Telangana has been continuing since olden days. The songs convey morals that are relevant even today. These songs are inspiring and give you a peep into the ancient culture of the state. If you desire to know more about Telanagana, just listen to its folk songs (devotional, mythological and love songs), film songs and Classic Carnatic music. Just like the green and beautiful state of Telangana, the music of Telangana too will enrich you and make your life happier!